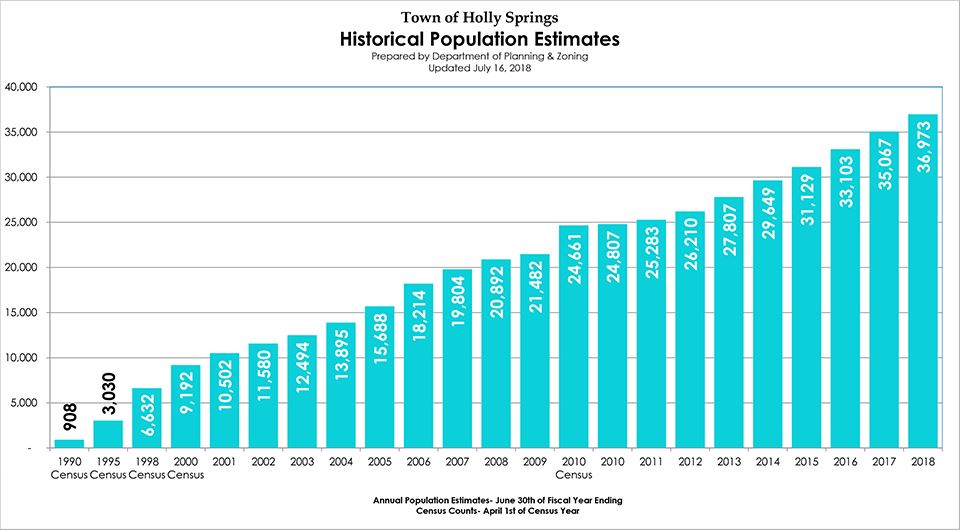 The chart above shows recent population estimates for the Town of Holly Springs. The chart below of future trends indicate that by 2023 nearly 50,000 people will be living in Holly Springs. 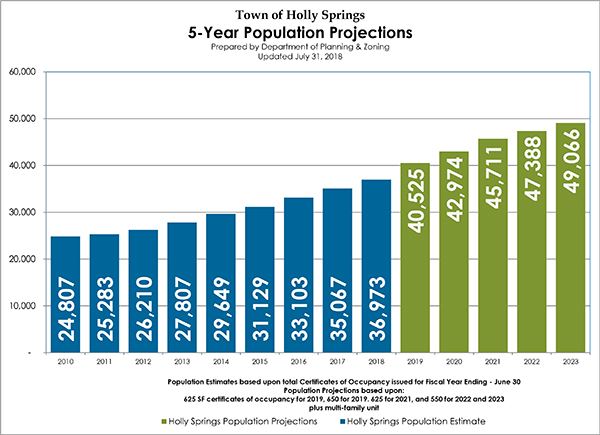 Holly Springs is the:

The median age here is:

97.5% have high school diploma.
56.7% have a college degree or higher.
18% have graduate or professional degrees.

The Make-Up of Holly Springs Households

Holly Springs families are young couples and young couples with children. The number of these types of households in Holly Springs is far greater than the national, state and county averages.
Source: U.S. Census Bureau; 2016 American Community Survey 1-Year Estimates

Holly Springs is highest in Wake County for home ownership and second highest in household size.

There are a lot of families in Holly Springs, with the average size at 3.05 persons. The median household income here is $98,041.

Most here own their homes.

Of our families, 88% own their homes, the highest home ownership rate in Wake County and significantly higher than the state or national rates. The average sales price of a home in Holly Springs is $265,676. The 15-year average number of annual new single-family residential building permits issued in Holly Springs is 477. 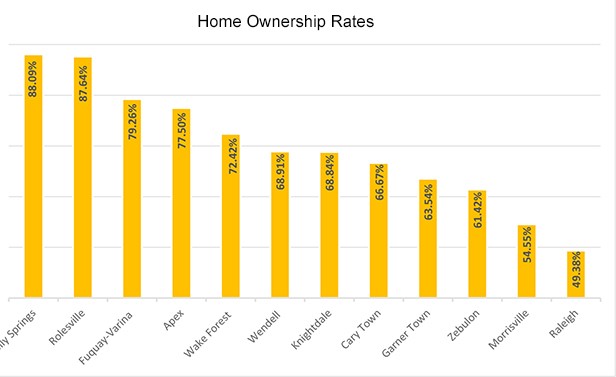 Local work force has a range of skills, talent and training

With its proximity to the significant number of universities, colleges and trade schools in the area, Holly Springs has access to a tremendous number of people with a wide range of skills, talents and education.

A 15-mile radius around downtown Holly Springs stretches to downtown Raleigh in the northeast, up through Apex, Cary and Morrisville all the way to the southern section of the Research Triangle Park in the north, into Chatham and Lee counties in the west, down to Harnett County in the south and over to Garner in the east. This 15-mile radius—which would be considered a very reasonable commute, represents a population of 617,000 and a total civilian labor force of nearly 320,000.

North Carolina is a right-to-work state and has one of the lowest unionization rates in the nation.

Nearly 25,000 graduates a year from 15 colleges and universities within 35 miles of Holly Springs enter the workforce, poised to lead companies to a prosperous and innovative future.

Holly Springs is in the center of the Triangle region and is within 35 miles of 15 colleges and universities. Among those are three world-renowned research universities: Duke University, the University of North Carolina at Chapel Hill and North Carolina State University. The region also is home to a dozen more small liberal arts colleges, historically black institutions and colleges that deliver higher education to rural residents and those entering the ministry.

Universities and colleges across our region understand their value in promoting economic growth, and their high-quality programs produce exceptional graduates in every field. With strong partnerships with businesses around the world, the faculties of North Carolina’s colleges and universities make sure academic programs stay highly relevant to the real world of business.